Where to start?! We’ve been here 6 days and I’m in heaven!! Until this morning, I couldn’t find a single thing bad to say about Sydney. Even the flight wasn’t as bad as I expected. It was…. memorable.

We were man on man defense: Angel with Lucas in one row and me with Joshua behind them. 15 hours, 2 vomit sessions, 5 blow outs, and an entire supple of wipes later, Angel and Lucas arrived refreshed while Joshua arrived naked and I looked like I was coming home from war. I doomed myself when I took this picture:

Drinking a glass of wine, watching a chick flick, and enjoying some baby snuggles. I thought the red eye was the best idea in the world until hour 2.

So once we got here, Joshua and I were first in the shower having already blown through 3 days worth of clothes (in a 7 day supply). I swear to all of my readers that I will be traveling home with twice as many wipes as I traveled here with. And maybe that 4th change of clothes (eye roll). We ate lunch in the hotel, walked down to the beach by the hotel, and went to bed early.

The next day we woke up too early to be appropriate and ventured into the city and off to the zoo.

Are we there yet? 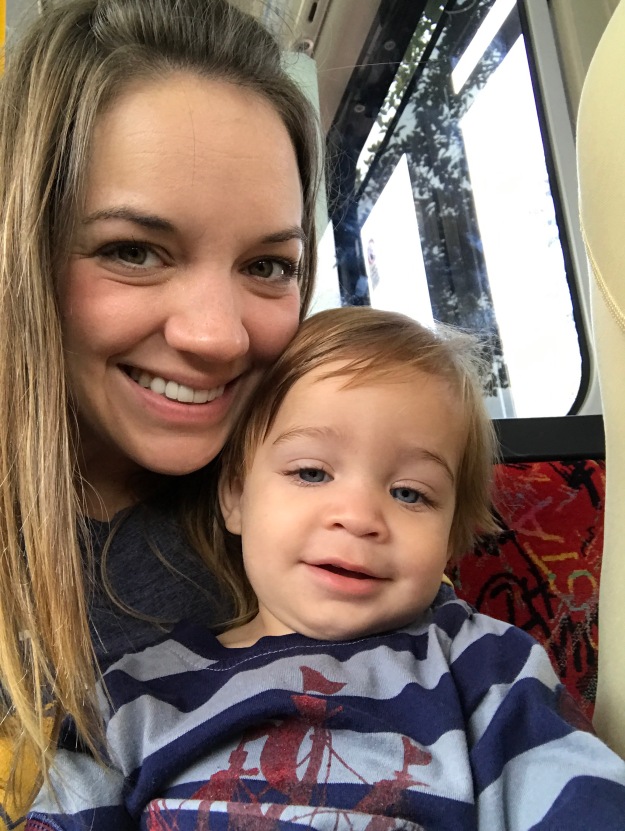 Escape from the stroller, because I swear to God if you wake up your brother we will not be friends for the rest of the day. 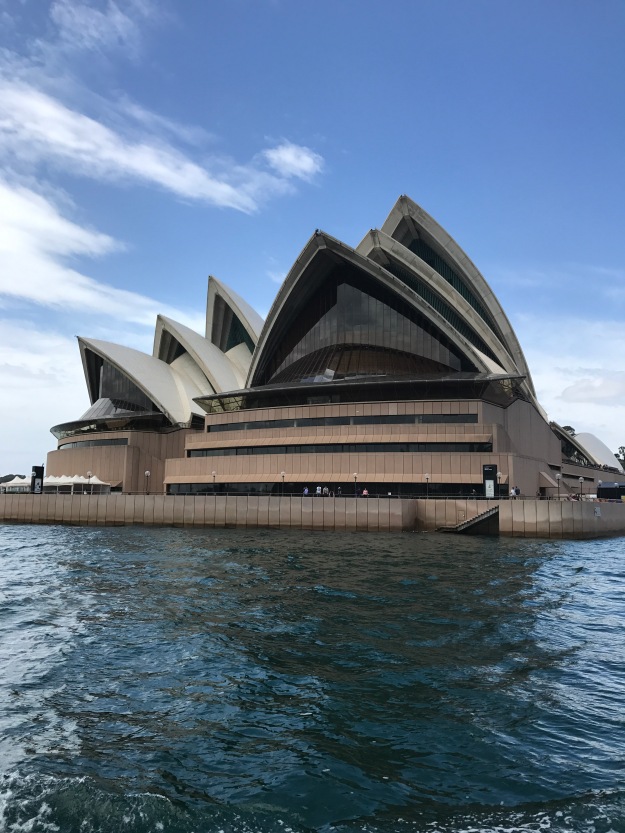 View from the ferry on the way to the zoo 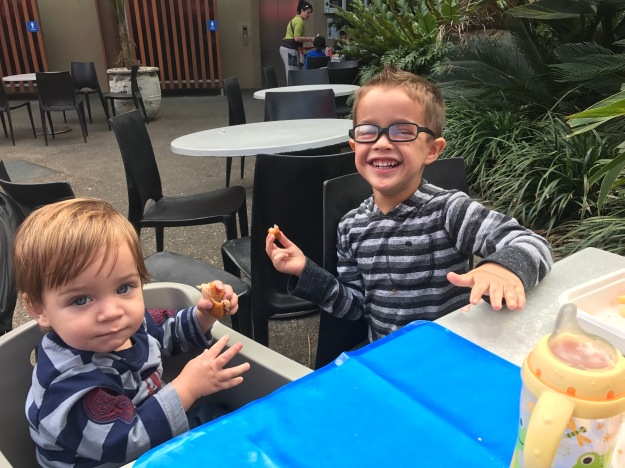 Lunch at the zoo with a couple of animals

I want to jump the fence and hold this koala. Is that so wrong? 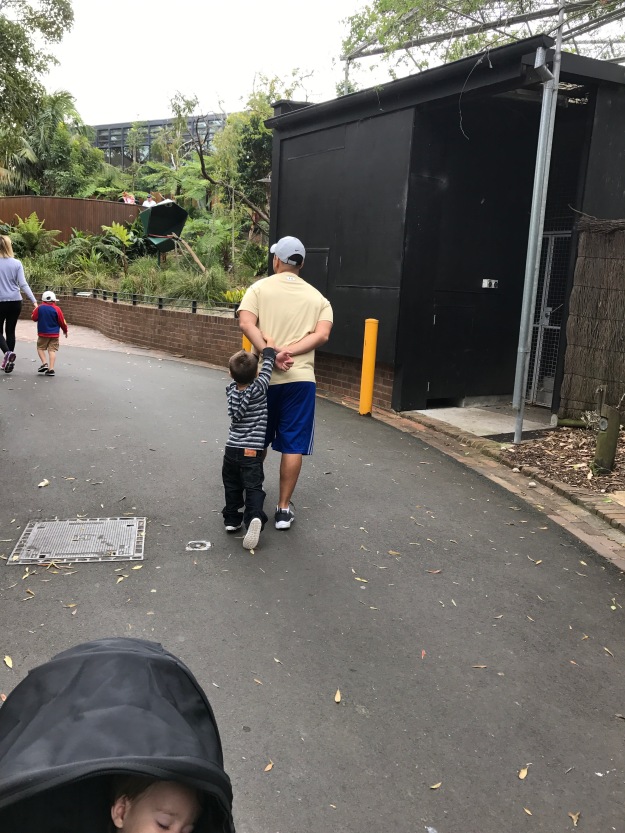 Lucas is loving that we got to follow Daddy to work this time. Joshua is too young to care where he sleeps.

Tour guide
The rest of the week has been a solo adventure. Angel is at work and I’m with these hooligans trying to get around half way across the world. Secretly? I love every second of it. I have fond memories of my Mom taking us into the City on SAN Francisco and doing all of these fun things all of the time and I feel like I’m that “cool” Mom here. Everyone is insanely friendly. Yesterday, we were coming home from the Maritime Muesum during rush hour so the city bus was crowded. I made Lucas sit in the stroller before the bus showed up because I was anticipating a struggle with a giant stroller in a crowded bus. But guess what happened when the bus showed up? The man in front of me getting onto the bus just bent down and picked up the front of this giant double stroller. No questions asked. AND he was in a suit! How many guys do you know would be in a business suit on their way home from work and just lift 50 pounds of stroller and children like it was as normal as stepping onto the bus himself? I was shocked (in a good way). But this pretty much describes my experience here. Everyone is so friendly! Someone overheard me telling Lucas that we were looking for the “M50” bus and he interrupted me to tell me that I was at the wrong stop and the M50 only stopped on the other side of the road at “that” sign (pointing) and then asking if I needed help getting somewhere. I’ve been out nearly every day this week solo with 2 kids and a double stroller and I had yet to meet someone who didn’t offer their assistance and genuinely mean it. 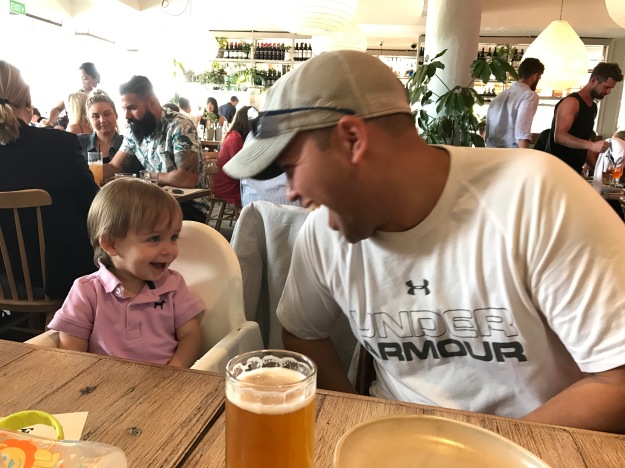 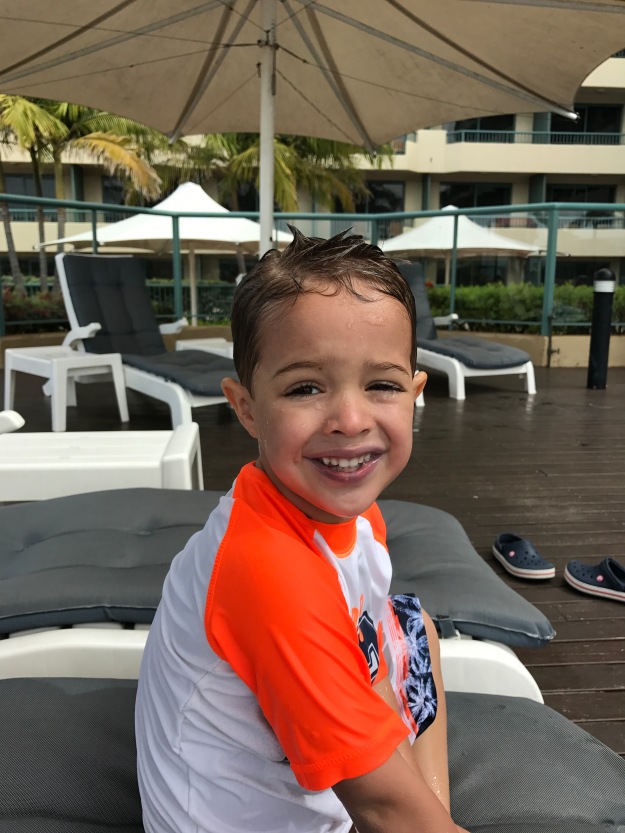 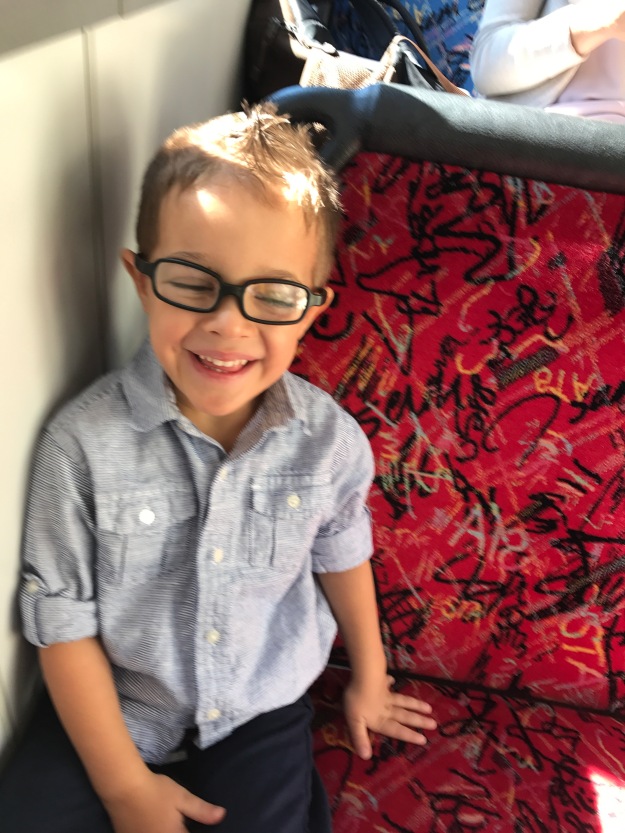 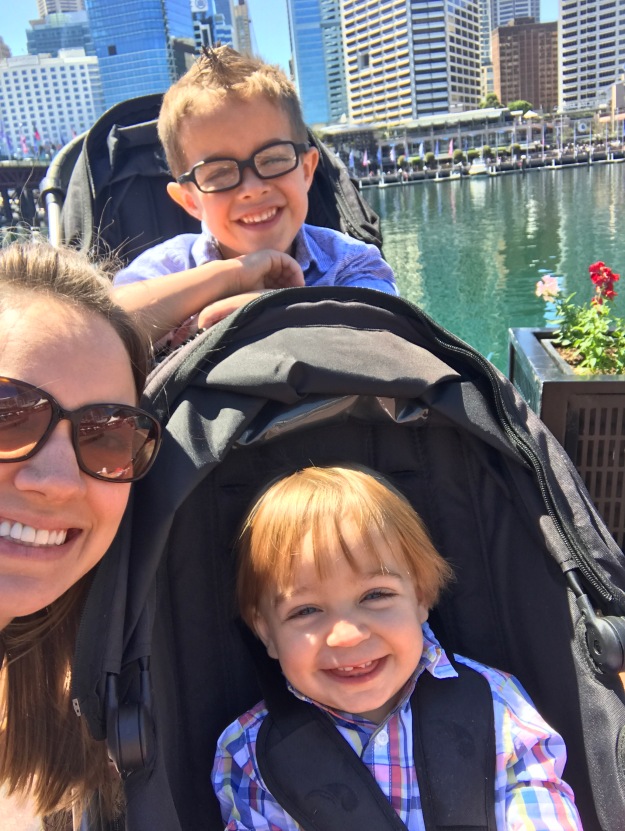 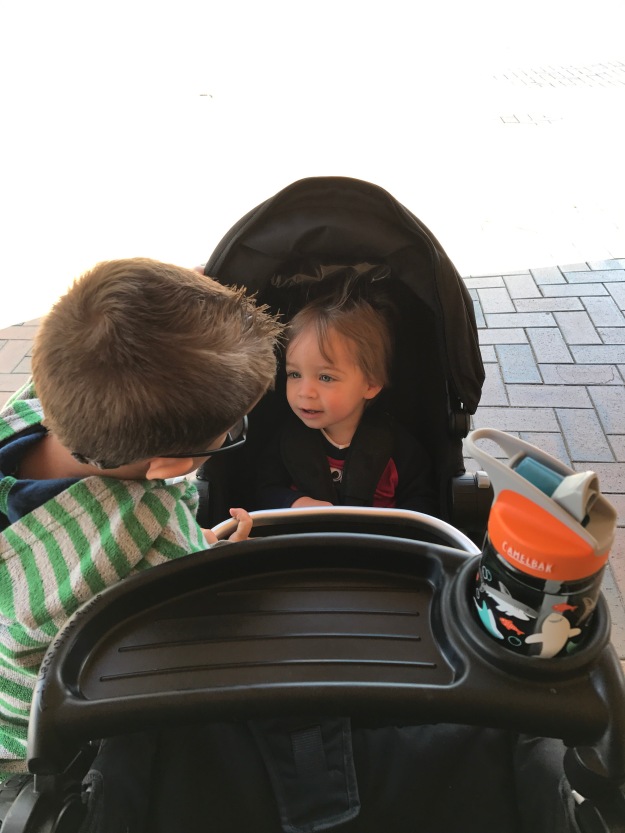 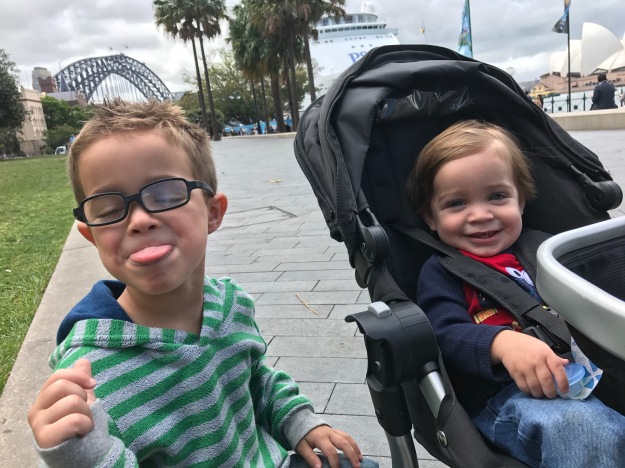 …until today. The wheels fell off the bus a bit today. We were venturing into the city again to walk around the opera house. When we got onto the bus, the designated seats for strollers and wheelchairs was taken by someone who was less than happy to follow the signs and “vacate” the seat. I didn’t want to cause a scene on a non crowded bus mid morning on a Thursday so I was thinking of what to do with the stroller when the lady stood up to move throwing F bombs all over the place directed at me and my tiny humans for just being. The bus started moving before I could get Lucas seated so he jerked and stepped on this lady’s foot (who was where it shouldn’t have been, might I add) and then she threw an F bomb straight at my 3 year old. I was doing my best to keep my Mama Bear claws away because I’m the visitor so I simply said “I’m sure he didn’t mean it” in a kind voice that sort of sounded like “go f- yourself” when the few people on the bus just said what I didn’t: “that was unnecessary!” So a long, drawn out story short, a bus of kind people (including another mom with a stroller) restored my faith in Sydney. When this lady got off of the bus, a couple of people started talking to me to apologize for her behavior. One stating that she was going to step in if that lady opened her mouth again. Naturally, they asked where my accent was from (now I’m the one with the accent!) and we got to talking. The other lady with the stroller gave me her number, told me she was a nanny, and offered to meet up for a “play” with the kids at a park! I’ve totally taken her up on the offer and she’s already texted me 100 different things to do with kids. She’s never going to read this blog, but I hope she knows that she’s the reason I didn’t have a sour feeling all day. Because of her, this day my mood wasnt as bad as it could have been.

So the boys and I had a lovely day playing in the grass, eating lunch, face timing Nana and Paws, and enjoying the Sydney Opera House 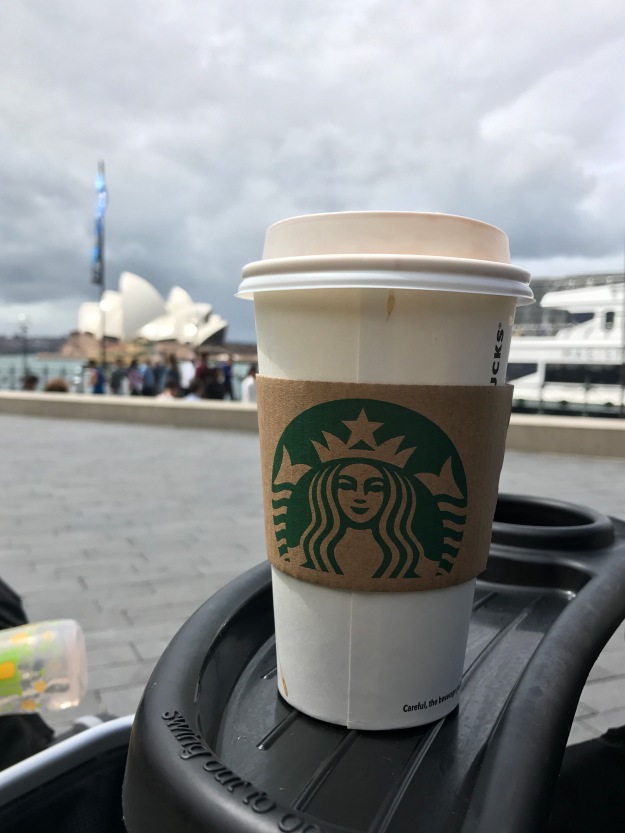 I got the munchkins shirts from a souviner shop and then it started to rain and was running into nap time so I toona deep breath and made my way back to the bus. We got back for nap, Lucas woke Joshua up because I wouldn’t let him eat a second apple. I got Joshua back to sleep and then Lucas woke him up again in 60 seconds flat for whatever other 3 year old reason. I texted Angel that I just couldn’t handle Lucas any more today. Luckily, my Knight in Shining Armour came striding in a few minute later and took over whiney preschooler for me. Tap. Out. We went to dinner and got a text from his coworker that the hotel was evacuated for a fire alarm while we were gone. I think it’s a blessing that I wasn’t there because I’m not sure I could handle 7 flights of stairs with an over-tired pair of children today. It was probably better that we were across the street putting food in our bellies.

Tomorrow I’m staying close to the hotel. Thanks to the flight, a couple of us are out of clothes so we’re going to spend the morning at the laundromat until Dad is done with work. But even after a trying day, I’m still not wanting to go home. Like, ever. I’ve even made a friend already!

Cheers, readers! It’s bedtime for me and time for you all to start the Thursday that was a little difficult on this side of the world. I wish you all better luck with it. And just tell that lady to F- off right from the get go. She’s going to deserve it. Or better yet, catch the next bus so you aren’t blindsided by someone who should have stayed home.