So it’s been a few weeks since I posed.  As Angel would probably point out to me when I mention that I didn’t have time for something “but you’ve been home all day?”  I suppose the boxes containing all of my belongings and a 3 month old baby who now is awake more often than asleep have been zapping all of my time.

So I’m flipping through the photos on my phone to try to remember what I did the last two weeks, and here’s something funny to point out: photos of myself to prove to Angel that I took a shower that day.  Welcome to stay-at-home-motherhood!

A few important and note-worthy things about the new house.  1. I made a coffee bar in the kitchen.  It hasn’t taken long for Angel to love it as much as I do (thank you, Pinterest), and now we probably spend more time there then anywhere else in the house.  Well, at least I do from 9-noon when I’m up with the baby: 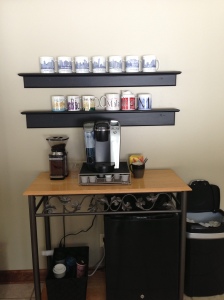 Next, Molly has learned that both the front windows are her height and that we have chipmunks in our yard.  It’s a loud combination and she’ll sit here by the hour during the day waiting for them:

Next, she’s also learned the new house alarm beeps.  In our house in Arizona the beep for the garage door was different but she knew that it meant we were home.  In this house there’s no garage door beep, so she’ll wait for him by the front window (above) and then when she sees his car pull into the driveway, she immediately runs to wait by the garage door because DAD’S HOME!

We finally finished putting up the plastic chicken wire inside our fence since it appears that Molly was small enough to get through the iron picket fence that was there.  Now that she has a yard and a bed that she recognizes, I think she’s starting to finally realize that this is now home.

I’ve been unpacking boxes like crazy and still have a few rooms and a basement left.  A few days of putting Lucas on the floor so I could unpack boxes to his screaming soundtrack, I decided “screw it” and baby and I spent a day in jammies cuddling in bed that we both deserved:

And as it turned out, Mommy desperately needed the day of baby cuddles and I didn’t realize it until the day was over.  I felt guilty for not getting anything that I needed to done, but those baby cuddles aren’t going to be around forever and those boxes are.

Then we hit the road!

Molly freaked out a little more than usual when we pulled out the suitcases to pack, but Angel’s brother came in from Ann Arbor to watch her and she loooooves him!  I started packing and got these in the mail:

Which I took as their way of saying “hey, we hear that you’re going to be flying alone with a 3 month old.  We’re really sorry about that.”

The three of us went to Arizona for a wedding of two people who’s first date was actually our wedding!  We stayed with a couple of our friends in Chandler and the evening of the wedding Lucas had his first babysitter(s)!  We had Paul and Michelle babysit for a few hours so that we had our first opportunity away from Lucas since this whole adventure started.  It was weird to not have the baby, but it was so nice to have a break for a few hours.

Unfortunately, I had a super short stay in Arizona and I didn’t get to spend nearly enough time with everyone who I wanted to!  We got in very late on Thursday night, and I left Saturday afternoon with a wedding in between.

On Saturday morning I convinced Angel to wake up early so that we could go take family photos with Brooke from Keki Photography (if you need a photographer in the Phoenix area, I love her!): 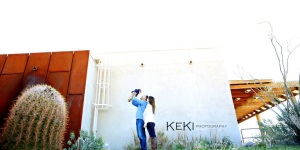 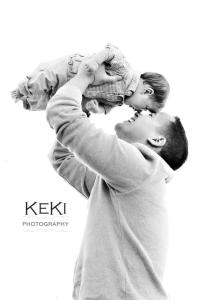 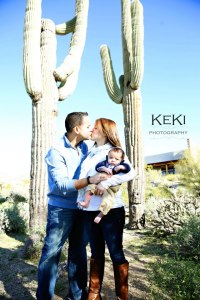 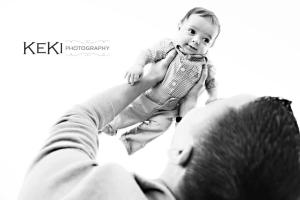 Annnnnnd then I realized that a white patterned scarf over a white shirt makes me look about 20 pounds heavier.  Awesome.  Anyway though, the photos are adorable and I love my little family!

After a quick lunch with my brother and sister-in-law, Lucas and I were off on our own to Colorado!

I was so nervous to fly by myself with Lucas and so sad to be leaving Arizona without seeing everyone I wanted to or spending as much time with them as I would like that I just started crying when Angel dropped me off.  My poopball must have known that I was nervous to fly with him, because as soon as we got on the plane, he curled in his knees and fell asleep in my lap and stayed that way all through the flight and the Denver airport!

He loves his little carrier, which makes my life at least 1,000 times easier.

In Colorado, everyone was excited to see Lucas and I didn’t even have to pick up my own child one time that I was there

Except maybe their dog, who was a little confused why she couldn’t play with the tiny human

Lucas and I got some good naps in during the afternoons when it was quiet.  And by the end of the week he started something new: a preference to Mommy.  There were a few times that he was fussy while my parents were holding him and then as soon as I took him he was calm.  He also couldn’t fall asleep one afternoon until he grabbed onto my hand.  Mommy’s not leaving you, little dude!

Since this adorable trend can’t last forever, I started replacing my hand with a security blanket and it seems to do the trick:

That trip was also too short, and I cried when I left Colorado as well.  It’s not easy being on my own here.  on the way back, I had a layover in St. Paul and was able to pick up another Starbucks mug for my collection 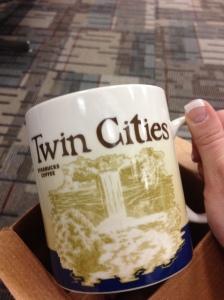 Lucas and I were having a great time in our hour layover.  He was sound asleep and I was debating when I should wake him up and give him the bottle that I made because nursing when I’m alone in public I would have to charge admission to to pay the bail when I was arrested for public nudity.  And then they announced that our flight was delayed by 2 hours and I called Delta every name in the book (in my head, naturally).  Lucas must read my mind because this is the time that he decided to have a public melt down.  So I took out the bottle, tried to feed him, and wouldn’t you guess that he chose this time to decide he didn’t want to drink from a bottle anymore.  I kept trying because it’s not like I could just whip out a boob there at the gate, but Lucas kept screaming like I was killing him and everyone started looking at me and thinking “Oh my God, I hope I’m not sitting net to her.”  Screw you all, seriously.  He’s a very good child current tantrum aside.

There was nowhere in that airport to feed him, so I ended up sitting on the floor of the family restroom for 20 minutes feeding my child.  Ugh.  And gross.  Those are the words that come to mind.

But after he ate, he was his adorable self again and I put his blanket on the floor of the gate area and let him lay there and play with his toys while everyone looked at me like “There’s a mom that has her shit together!”  Or something equally flattering, I imagine.

Once I was home, life got back to normal.  Lucas didn’t think he was as adorable as I did in his Mickey onesie:

And that just made me laugh.  So like a good mom I took pictures of him screaming at me and sent them to my mom and Angel and anyone else who I thought would appreciate them and not call CPS on me.

I asked Angel to unpack his closet and he asks me “What’s left to unpack?”  I appreciate that he doesn’t see messes, that’s really going to come in handy as soon as our munchkin puts momentum behind his movements 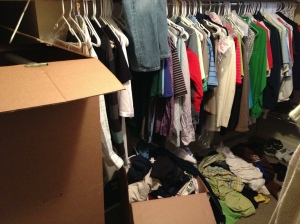 For one last photo for the post, I was unpacking the craft room that I negotiated in the move and it was nap time for Lucas.  So I put him on the little futon in the room and went about my business and a few minutes later Molly found a spot for her afternoon nap as well.  Dog: Man’s best friend.

There’s just so much adorableness going on in that picture, I’m not sure where to start.

So that’s what I’ve been up to according to my iPhone photo album.