There’s so much to talk about, and I’m already behind so let me just get right to it….

First, my baby is 36 weeks old.  And like I vaguely announced last week, I have the stretch marks to prove that this was the week little Mini Me decided that it was time to start growing!  I thank him for at least waiting as long as possible to make me fat and uncomfortable, but the result is the same.  In fact, I write this sitting on the couch in an awkward position because my belly now GETS IN THE WAY of everything and typing is hard (so please pardon any typos that are coming).  I didn’t even dare write this from my ipad because first, I can’t find it, and second because I don’t know where I would set it and still be able to type as much as I have to say.

I meant to type this all earlier, but in my first official day off of work, I’ve been busy doing I have no idea what.  Seriously.  I have no idea how it’s already 3pm.

So anyway, baby is still big, still moving, and still gaining weight.  All of which I hear are good things.  At the end of this week he’ll be considered full term and I’ll consider myself done and start answering with “any day now!” when people ask me how much longer I have left.  And then I’ll probably run away and secretly hyperventilate into a brown paper bag because he really can come any day and pending an otherwise healthy baby, will have lungs developed enough to function on his own and he’ll be leaving the hospital at the same time that I am.

Can we talk about false labor?  I’ve had it with BH contractions.  I feel like false labor should shut up, curl up, and die.  And then set itself on fire.  These contractions keep coming whether I’m sitting up, laying down, standing, walking, chugging water, or plowing my way through a bag of halloween candy and not only are they uncomfortable but they are starting to hurt.  In a way that almost has me calling Angel at work and telling him that it’s time to come home and freak out with me.  His daddy intuition must have known something was up because he showed up at lunch to stay home the rest of the afternoon to make sure the baby and I were both okay.  WE’RE FINE.  WE’RE SLEEPING.  RWAR!

I’m still convinced that Baby Rivas is coming early.  Anyone who disagrees with my mother’s intuition, I refer you back to the weeks that I was convinced that I was having a boy before it was confirmed that I am, in fact, having a boy.  So I’ll continue to march to the tune of a (roughly) 39 week delivery, and you can secretly continue to think that I’m crazy for thinking baby is coming early when I have no logical reason why he would.  Suck on that, science.

I’m pretty sure that he’s “dropped.”  I put that in quotes because in the off chance that you haven’t noticed that I’m only 5’2″, allow me to point out that I don’t have a lot of room for him to sit high or low.  He just….. sits.  The only reason I think he may have moved down is because my acid reflux has backed off enough that I stopped throwing up multiple times a day.  The last few nights I even dared myself to fall asleep without taking Tums to see what happened and I didn’t wake up in the middle of the night choking on my own vomit.  Success!  So either baby has all of the hair that he thinks he needs now, or my tummy finally kicked him out and forced him to take up residence further south.  Either way, I’ll take what I can get at this point.

This week I got this amazing package in the mail:

Everyone hug your local UPS driver. It looks like they aren’t getting enough love over here

and in it was the BEST quilt!  My aunt (great aunt? cousin? My grandpa’s brother’s daughter-in-law who shares what used to be my last name.  Whatever that makes her to me besides “awesome”) made it!  To provide a little color, my grandma would make all of the new babies in the family a quilt before they were born, and my aunt (great aunt? cousin? Whatever, you get the idea) decided that she was going to step up to the plate.  I love her anyway, but I am extremely touched by it: 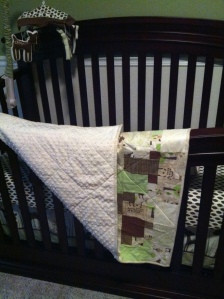 She also sent an adorable Christmas outfit that Mini Me is excited to wear.  I know this because he kicked like crazy while I was opening the package and I took that to translate into “I love it!”

All of this baby business wouldn’t be possible without my husband, so on to topic number two: today is our 2 year anniversary!!  I decided that today I would go ahead and like him so I’m planning to make an awesome dinner complete with wine (for those of the two of us who can drink. grrrrr….) and an artichoke crab dip that I’m excited to try.  Of course, Angel doesn’t know any of this is coming, just that I said I was going to make him dinner tonight and that he was forced to eat it no matter what it was.  When I asked him what he would like me to make, he suggested cheese meatballs (haha, take that, mom!)

Our lives are about to change just about any day now and I couldn’t be happier to be going through it with him.  Looking back, all of my best days have been since I met him.  So here’s to 50 more years together that are as exciting and loving as the first 2 were.