I’m 29 weeks (*cough* 3 days ago), which means that I’m only 3 weeks away from being able to deliver this baby at my planned hospital (prior to 32 weeks I need a hospital with a level 3 NICU).  It’s scary to know that in just 3 weeks I can plan on a healthy baby only spending a week or two in the hospital.  How did this sneak up on me so quickly and yet so paaaaaaaaaaaaainfully slowly.

I purchased diapers this week because I felt the need to be a little more prepared for this kiddo than a few onesies and an awesome diaper bag.  I’m not really exaggerating- we have those and a car seat…. and that’s it.  No crib, no changing table, and no bottles or pacifiers.  Those are all overrated anyway and serve no productive purpose than to freak me the crap out while waiting for this little guy to come.

On Saturday we went to tour the hospital maternity services and I almost backhanded my adorable husband for comparing everything to when his mom had his brother.  I’m not sure why it bothers me since that’s his only point of reference and I’ve got nothing, so I’m just going to assume that the hormonal mood swings are back.  Which is great, I bet Angel really missed them.

I’m in a constant battle with Angel not to wear shoes in the house because I’m tired of dirty floors and not wearing shoes is a good habit to get into since we’re about to have a kiddo on the floor 24/7 putting things on the floor in his mouth so I took a page out of Marriage Psychology 101 (i.e. forceful lessons) and asked him to help me for 30 minutes last night vacuum the floors while I followed with the mop.  He asked me if asking him to help made me feel better so I asked him if bitching about it made him feel better and that was apparently the wrong thing to say because he just stared at me for a minute trying to decide if it was worth the fight.  He smartly decided that it wasn’t and instead asked if he had to vacuum the office as well and what order he should vacuum in.  I told him yes, and however he wanted to do it and my inner Hormonal Goddess felt a little bad and yet victorious at the same time.  He vacuumed one area, moved to the other side of the house, came back, did the hall, skipped the laundry room, and then finished by “spot vacuuming” the kitchen.  Knowing that opening my mouth meant the end of household help, I chose to ignore the hairballs and lint scraps still hanging around and just following him room to room in random order with my mop and bucket.  And you know what?  The house still got clean and I didn’t have to do it all AND at the end of it Angel went upstairs to change his flip flops for slippers and I didn’t even have to ask him to.  I thank my mom for teaching this to me after I was first married.  She was in town and we were making dinner in my kitchen when she asked where the bowls were.  When I pointed her to the cabinet she looked at me like I had two heads and then I sighed and told her that Angel must have unloaded the dishwasher so her guess was as good as mine.  She laughed and told me “the first time that you say something to him is the last time that he’ll unload it, so it’s probably better to just look through the cabinets on your own.”  It took me a while to understand how he can know where the bowls are to use them but not to put them away, but now I totally get it and see that she is speaking words of wisdom.  I thank you, Yoda.

This also reminds me of the Laundry Standoff of 2009 where he complained about me keeping clean laundry in the baskets and not putting them away right away to prevent wrinkles.  I told him that he should be glad the laundry is clean and using an iron is a small price to pay for my services and when he didn’t let it go I spent 2 weeks pulling just my laundry out of the laundry basket and washing that.  When he was forced to work from home because his underwear drawer was empty one morning, that seemed to be the end of his wrinkled shirt commentary and I went back to adding his laundry to mine as a favor.  The lesson here is that complaining is a 2 way street full of warning signs, traffic cones, and large obstacles that will inflict permanent damage if not navigated carefully.

And wow, that’s a really long and drawn out way to tell you all that Angel vacuumed my floors this weekend! 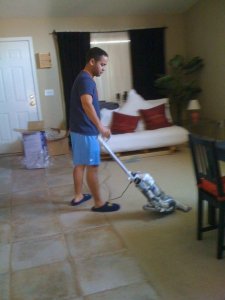 Him vacuuming is so rare that I literally had to hide and take a picture the last time that it happened as proof that he DOES know how to use it (The first and last time he used the vacuum in March 2010).

So back to baby.  He’s big and strong enough to resemble a sinister alien thrashing around my abdomen, as my husband kindly pointed out recently, upon noticing a rouge pointy elbow jabbing up and down around my belly button.  He’s also sucking up all of the calcium from the Tums I’m eating like they’re Skittles, like a selfish little baby trying to develop his bones.  Which is just what I need: MORE pointy, sharp bones. All the better to stab you with

The doctor yesterday told me that I’ve only gained 17 1/2 pounds so far which he commented as being “very good” and literally used the phrase “keep doing what you’re doing” which I have been saying on here all along.  So after dinner I helped myself to a second Oreo Klondike bar and almost considered a third (because oh my God, they taste soooo good with the heartburn) but thought that at 3 Angel had grounds for open judgement so I decided to save some for today.

I also tried to paint my own toenails this weekend and was stupidly surprised when I leaned forward a little and *BLAM* my belly hit my thighs and the polish brush remained a good three inches away from my toes. So I moved to the bottom stair where I could spread my legs and dip my belly in between them (Damn, aren’t I the fancy lady).  And speaking of making myself look presentable again, I went to get my hair cut last night!  I embarrassingly mentioned that my roots are a bit out of control (since I last highlighted my hair almost a year ago) and the lady pulled up all of these magazine photos of “ombre hair color” which is where the top half of someone’s hair color is a few shades lighter than the bottom and explained to me that women are coming in by the PILES to pay hundreds of dollars to make their hair look like that.  I told her that she should recommend just getting knocked up instead, but I see how that may be a serious flaw in their business model so she just laughed.  It’s not like I feel less embarrassed about my hair color, I’m just embarrassed for a totally different reason.  Now I feel like I’m so out of touch with what’s “hip” that I just pulled an old pair of “vintage” 70’s bell bottoms out of my closet to find that they were back in style again and decided to rock them while my real jeans were in the washer.  Only it’s hair color, not laundry day, and I can’t do anything about it for another 74 days (roughly).

Mini Me, you are already changing my life.